super8waysultimate Have you ever really talked about your hands? | PanLex

Let’s start with the index finger, or forefinger. The index in index finger comes from Latin and refers to demonstrating or pointing, much like how an index is used to show where concepts are located in a book. It’s also related to the word indicate. It turns out that the name of this finger in many languages is related to the word for pointing, expressing, indicating, or guiding. Some examples include Czech ukazovák ‘pointer’, Welsh mynegfys ‘expressing-finger’ and Guaraní kuãmbo’e ‘guiding-finger’. Thai นิ้วชี้ ‘pointing finger’ is especially interesting because ชี้ ‘point’ is a very old borrowing from Chinese that originally meant ‘finger’. นิ้วชี้ literally means ‘finger finger’!

Another source of names for the index finger are words for eating, presumably because when foods are eaten with the hands, the index finger is usually the one doing a majority of the work. Chinese (many varieties) has 食指 ‘eating finger’, Syriac has ܡܛܘܚܬܐ from ܡܛܚ meaning ‘to lick’, and in Hawaiian it’s manamana miki meaning ‘finger for dipping (as in to poi, the traditional Hawaiian staple)’. The Chinese example is quite interesting as Chinese culture is typically very averse to eating with the fingers—in restaurants, diners ordering finger foods are often given disposable gloves to avoid touching the food directly.

Finally, the index finger is often referred to by its position on the hand, as in the English forefinger (as in ‘the finger that comes before’), Taishanese 二指 ‘second finger’, and the logical but confusing Navajo álaʼ tsostsʼidí ‘seventh finger’.

Words for the middle finger tend to have less diverse etymologies, likely due to the fact that the middle finger doesn’t often have specific “uses” like the index finger (other than as a North American expression of extreme displeasure in someone’s actions). They typically translate to ‘middle’, as in Dutch middelvinger, Tibetan དཀྱིལ་མཛུབ, Nahuatl tomapil hueyacauh, and Akkadian 𒋗𒋛𒌘. The other primary source of middle finger words is ‘large’ or ‘long’, such as the French majeur, the Danish langfinger, and the Hawaiian manamana loa.

The English name ring finger is one that is distinctly culturally specific. Wearing a ring on one’s finger next to the pinkie as an indicator of marriage is a European-specific custom (although it has more recently spread throughout the world due to globalization). As such, it is primarily European languages that use the term ‘ring finger’, such as Portuguese dedo anular, Icelandic baugfingur, and Irish méar an fháinne. Oddly enough, the other common term for the ring finger is the ‘nameless finger’, appearing in languages as diverse as Finnish nimetön, Sanskrit अनामिका, and Classical Chinese 無名指.

The pinky or little finger, like the thumb, often has names that are not directly analyzable, such as the English name pinky or the Armenian ճկույթ, neither of which mean anything else in their respective languages other than the name of the finger in question. However, it is also extremely common for the little finger to be named something translating to ‘small finger’, such as the Laz წულუ კითი, Manchu ᡶᡳᠶᠠᠩᡤᡡ ᠰᡳᠮᡥᡠᠨ, and Crimean Tatar kiçik parmaq. Somewhat similar are names like the Nahuatl mahpilxocoyotl ‘youngest child finger’, the Vietnamese ngón út ‘youngest finger’, or the Burarra gun-jarlarla meaning ‘sprout-finger’.

One somewhat disturbing and possibly medically unsound word for the pinky is the French auriculaire meaning ‘pertaining to the ear’, likely because of its use to clean the ears!

Of all of the digits, the thumb is most likely to have names that aren’t translatable to anything other than ‘thumb’. This is actually typical of most body parts. In most languages, the words for ‘heart’ or ‘skin’ cannot be broken down into parts; unlike words for fingers, they are not typically constructions like ‘blood-pumper-organ’ or ‘body-covering-organ’. Thumbs, usually, are just ‘thumbs’, like the Yoruba àtànpàkò, the Marathi अंगठा, or the Latvian īkšķis. If they do have an analyzable name, it usually translates to ‘large finger’, such as Russian большой палец or Navajo álátsoh. 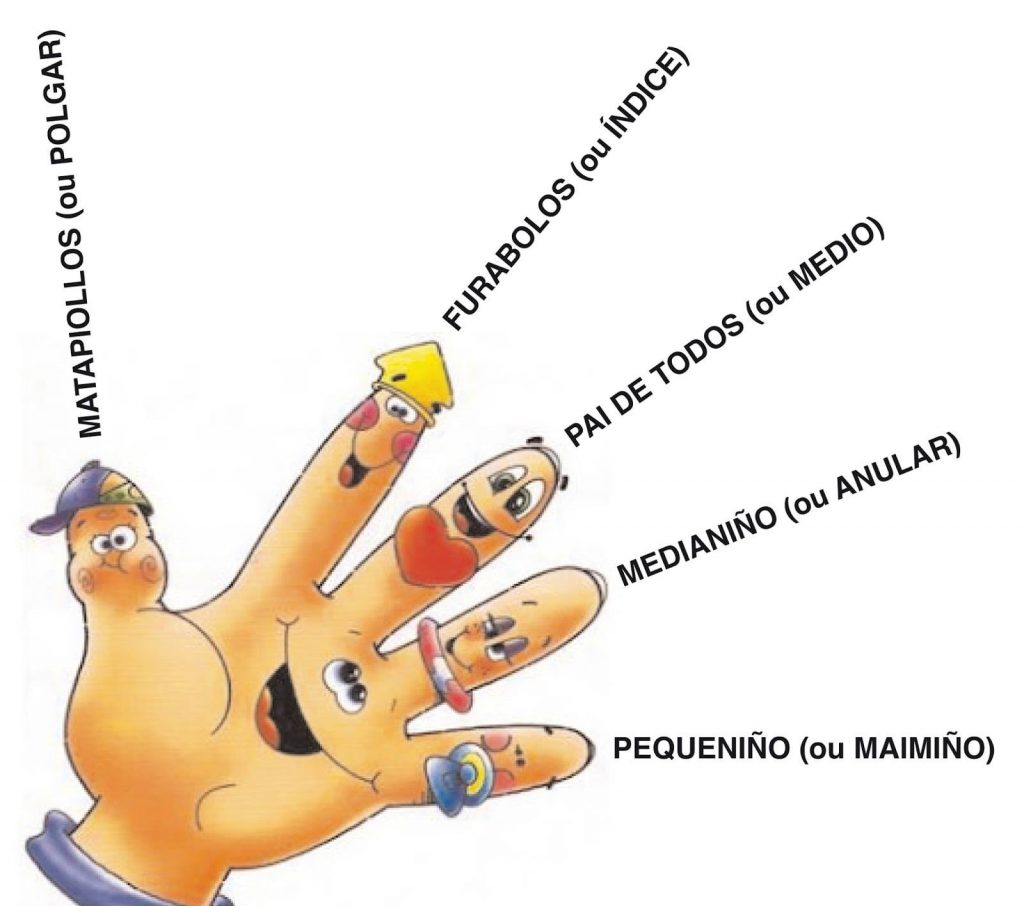 In the course of my research for this finger-tour, I discovered two languages with truly bizarre words for fingers. Indonesian and Malay have the whimsical and evocative (from thumb to pinky): ibu jari ‘finger mother’, jari telunjuk ‘showing finger’, jari hantu ‘ghost finger’, jari manis (‘sweet finger’), and jari kalingking ‘kalingking finger’ (no other translation).

It appears that Galician has a marvelous tradition of absurdist finger names (in addition to the more sober standard names that closely resemble the other Romance languages). The thumb is the matapiollos or ‘lice-killer’, the index is the furabolos or ‘bun-poker’, the middle finger is the pai de todos or ‘father of everything’, the ring finger is the medianiño or ‘little-middle-one’ and the pinky is the pequeniño or ‘little-tiny-one’.

It is a testament to the great diversity of languages on the planet that there can be so many different kinds of names for something as seemingly mundane as one’s fingers. I love how the names can betray interesting tidbits of the culture a language is spoken in, and just as easily say something about the commonalities that all humans experience in using their bodies as they navigate the world around them.

And I don’t know about you, but from now on, I’m definitely referring to my index fingers as my “bun-pokers”.

If you know of any interesting finger names in other languages, or if you notice any errors in this post, please mention them in the comments below!