Proper nouns (names of unique things in the world, such as Berkeley and James) can be translated in the same way as common nouns (names of classes of things, such as city and person). For example, the same city in Ukraine is known as Lviv in English, Львів (L’viv) in Ukrainian, Львов (L’vov) in Russian, Lwów in Polish, and Lemberg in German. Traditional translation dictionaries often exclude proper nouns, but the PanLex Database has many of them; it can translate Львів from Ukrainian into English. Proper noun translations often provide a fascinating window into political and cultural history. The Slavic root contained in name Lviv is a great example, as it appears in the names of two famous Russians: the novelist Leo Tolstoy and the revolutionary Leon Trotsky. This post explores how their first names were translated into English and why they do not match.

The city of Lviv is named for a 13th century king named Лев (Lev, pronounced “Lyeff”). Лев is a common Russian and Ukrainian name derived from the common noun лев (lev), meaning “lion”. The word лев, in turn, derives from Proto-Slavic *lь̃vъ, which was ultimately borrowed from Latin leo, also meaning “lion”.  The same Latin word gave rise to the name Leo in English, which can be either a complete name or the short form of Leonard.

Translating personal names is not as straightforward as it might seem. When there is a direct equivalent, as with Лев and Leo, the name can be rendered in English either natively (as Leo) or closer to the original (as Lev). Different translators make different choices, but generally, they only translate names when the original would be unfamiliar and the translation is not jarring. For example, the Russian poet Alexander Pushkin’s first name is Александр (Aleksandr) in Russian, but the original is rarely used: Aleksandr sounds nearly the same as Alexander, but looks strange to the average English reader. In contrast, the Italian opera composer Giuseppe Verdi’s first name is never translated in English, presumably because Joseph Verdi would be quite different from the original, to the point that it would sound “un-Italian” and rather ridiculous.

From one Lev to another

What about Leo Tolstoy and Leon Trotsky? Their full Russian names are Лев Николаевич Толстой (Lev Nikoláevich Tolstój) and Лев Давидович Троцкий (Lev Davídovich Trótskij). As you can see, they have identical given names in Russian, but the names were translated differently into English. How did this happen? 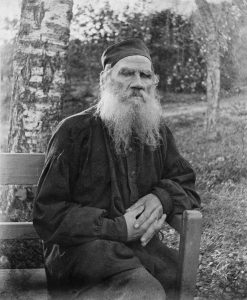 From the beginning, Tolstoy’s first name has been translated into English as Leo. The New York Times consistently does so, beginning with the February 23, 1869 issue mentioning “Count Leo Tolstoi’s account of ‘Sevastopol in May, 1855’”. Constance Garnett, Tolstoy’s most well-known English translator, rendered his name as Leo in her translations of Anna Karenina (1901) and War and Peace (1904). The only notable exception that I have found is Clara Bell’s early English translation of War and Peace (1886), which gives his name as Léon Tolstoï. Bell’s translation was based on a French one, and this spelling is clearly taken from the French form of the name. Given this cumulative evidence, we may suppose that the preferred English translation of Лев is Leo. The PanLex Database confirms this. 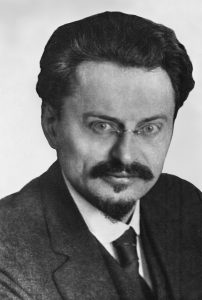 Trotsky is first mentioned in the New York Times in the January 15, 1917 issue, which states, “Leon Trotzky, a Russian journalist and socialist, arrived yesterday from Cadiz”. The Times regularly mentions Trotsky in its coverage of the Russian revolution and its aftermath, generally as Leon, but occasionally as Leo.

The Google Books Ngram viewer, which graphs usage frequency across many books over time, confirms that Tolstoy’s first name in English has consistently appeared as Leo, and Trotsky’s as Leon:

Frequency of Leo and Leon as first names of Tolstoy and Trotsky over time.

As members of the Russian intelligentsia, Tolstoy and Trotsky were both fluent in French. The first lines of Tolstoy’s novel War and Peace are famously in French, not Russian. However, Trotsky, unlike Tolstoy, spent considerable time outside Russia. From 1902 until his assassination in 1940, political exile drove Trotsky to live at various times in London, Vienna, France, Spain, New York, Turkey, Norway, and Mexico. It is likely that while living abroad, Trotsky adopted the French form of his first name, Léon, as French was the language he was most familiar with after Russian. This would explain why he was identified in English as Leon upon his 1917 arrival in New York. In contrast, Tolstoy’s first name was translated directly into English as Leo; the only exception found above was a translation through French.

In recent years, it has become common to render names in English closer to their original form. For example, the Russian-born chess grandmaster Lev Alburt, who defected to the US in 1979, was never called Leo or Leon. Interestingly, this trend has also affected people who lived when name translation was more common, but who are not well-known to English-speaking audiences. Lev Kamenev was a contemporary of Trotsky and prominent early Bolshevik; he was executed in 1936 during Stalin’s purges. Kamenev’s first name was generally rendered in English as Leo up to the 1960s, but he was not nearly as famous as Trotsky, so the precise form of his name was less likely to be fixed in readers’ minds. More recently, the preferred form of his name has become Lev:

Frequency of Leo, Leon, and Lev as first names of Kamenev over time. (From Google Books Ngram viewer.)

We have seen that translation of proper nouns is an interesting and complex topic. The details of particular translations can open a window into history. In general, name translation seems to be particularly common with royalty. For example, several kings of Prussia are known in English as Frederick William rather than the original German, Friedrich Wilhelm. The first emperor of Russia is known in English as Peter rather than the original Russian, Пётр (Pyotr). (PanLex can translate both names into English.)