The term onomatopœia, derived from the Greek ὀνοματοποιία (ὄνομα (ónoma), “name” + ποιέω (poiéō), “to make, to do, to produce”), refers to words whose phonetic forms originate from the sound of the thing or action the word represents. Common examples from English are “oink”, “beep”, and “hiccup”. Japanese is known for having a very large set of onomatopœias, covering a wider range of topics than the onomatopœia of other languages. For example, どきどき (doki doki) means “with a racing heart”, in imitation of a rapid heartbeat. Some Japanese onomatopœias represent a metaphorical sound, such as the rather amusing しいん (shiin), meaning “the sound of silence”. One fascinating aspect of onomatopœias is that, although they derive from non-linguistic sounds, cross-linguistically they often differ. For example, the English representation of the sound of a pig is “oink”, but in Mandarin it is 哼哼 (hēng hēng), in Swedish it is nöff, and in Thai it is อู๊ด (úut). 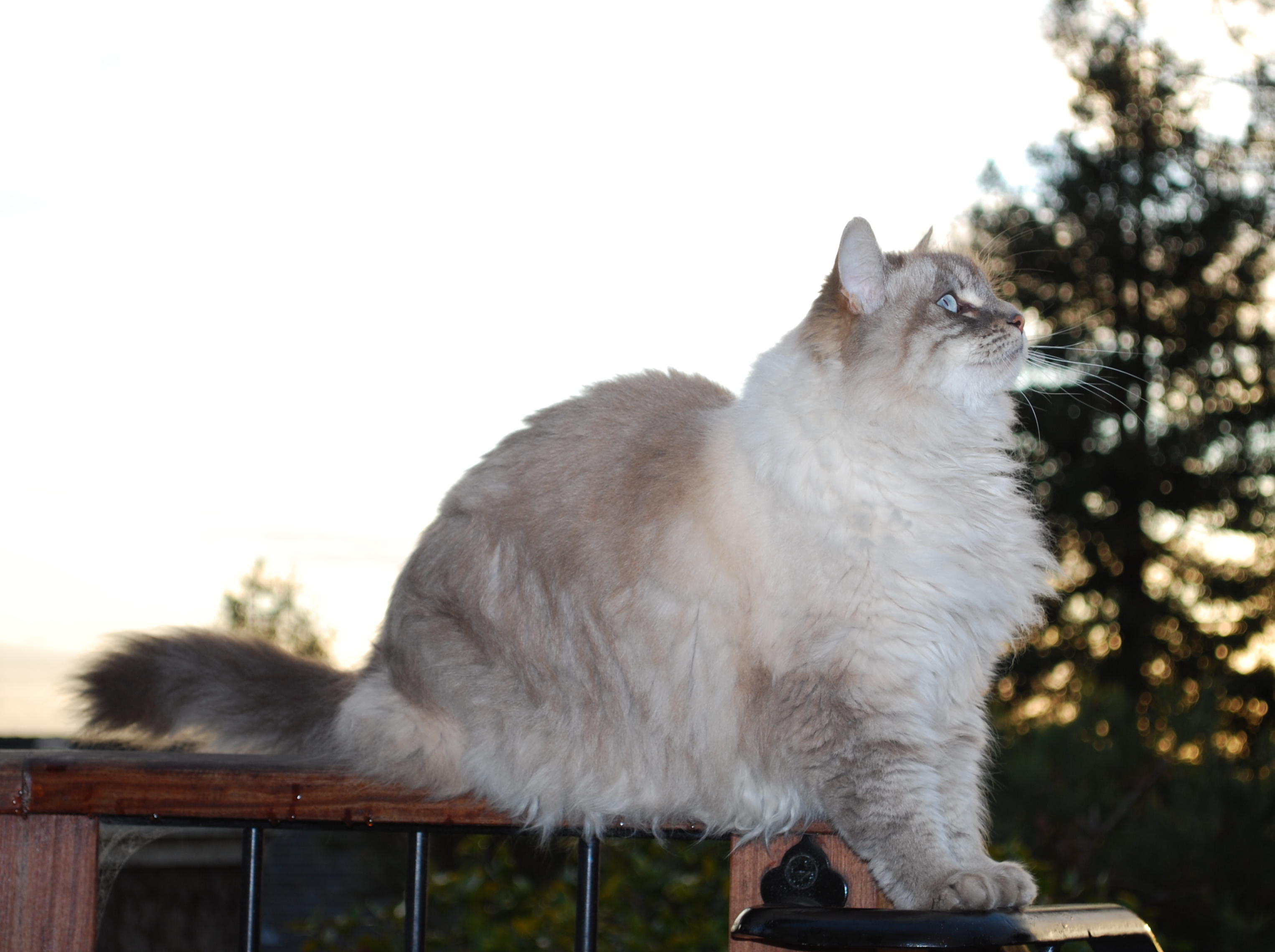 Angel in her Berkeley back yard. (Image by Donald Anderson.)

A very common place to find onomatopœia cross-linguistically is words for animal sounds, such as “oink” or “moo”. In investigating the repertoire of onomatopœia found in the PanLex Database, we discovered something fascinating—while the onomatopœtic words for dog sounds vary widely, the equivalent words for cat sounds are all very, very similar:

The dog sounds are all over the map. The only thing they might have in common are low, back vowels (think aw and ah). This diversity is also reflected within languages—note that English also has “bark” and “yap” for dog onomatopœias. On the other hand, the cat onomatopœias across languages are all almost identical. The only odd one out in this selection is Khmer, due to the initial consonant [ŋ] (as in the final sound of “sing”) instead of [m]. But even there, [ŋ] is at least a nasal consonant, and the rest of the word resembles the others quite closely.

My hypothesis is that the different nature of communication in dogs and cats explains the difference in cross-linguistic onomatopœias. Dogs communicate with each other using a wide range of different vocalizations: they growl and yip and bark, and each vocalization transmits the dog’s mood, energy, and opinion of the situation. On the other hand, cats’ primary form of communication with other cats rests in body language. While they do make vocalizations to each other, they are fewer and tend to be either in the realm of “high intensity” situations such as fighting, mating, or being in distress, or they are between a kitten and its mother. 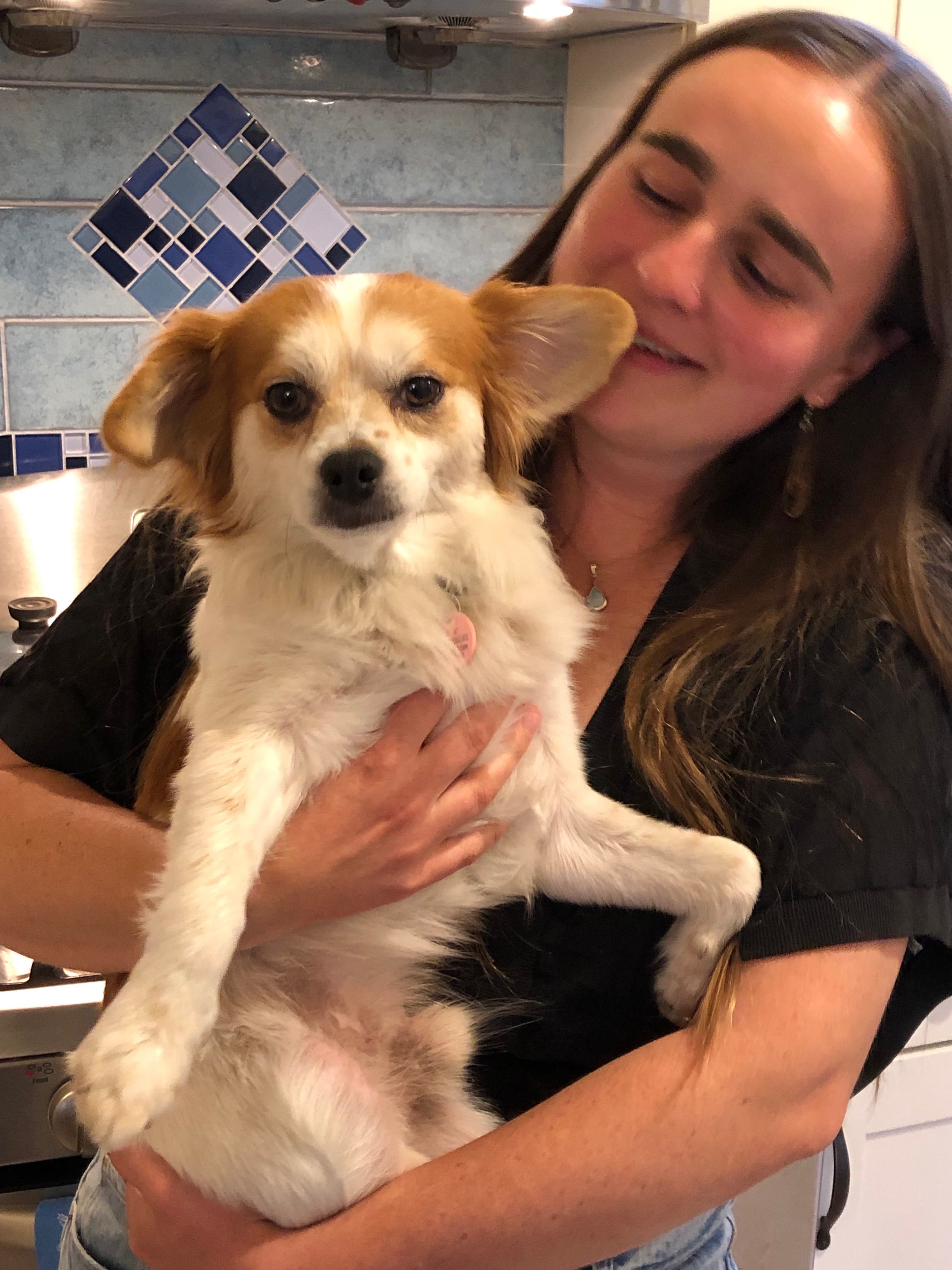 When dogs were domesticated, they brought their communication methods with them. Humans being primarily vocal-communication creatures made this arrangement work very well, with humans learning the meaning of dog vocalizations, and dogs learning at least the intention behind human vocalizations, if not always the exact message being transmitted. However, cats’ standard methods of body-language communication towards humans often fall on deaf ears. Cats instead are left with their one common vocalization that they use to communicate with the humans in their lives, their “meow”.

Given this, it makes sense that different groups of humans may zero in on different dog vocalizations as the “archetypical dog vocalization” enshrined into that groups’ onomatopœia. But with only a “meow” to work with, humans all over the world are hearing cats say more or less the same thing everywhere, and onomatopœia-izing it similarly.

The PanLex Database contains a significant amount of data for this kind of research. While “one-language-to-one-language” translations may be the most common use case of the database, a query that may be characterized as “give me all of the words for ‘meow’ in as many languages as possible” can be accomplished quite easily using the freely-accessible PanLex API. For details on how to use the API, visit our API documentation website at https://dev.panlex.org/api/. We are also currently developing a web interface for making “one-language-to-many-languages” translations, which will allow less technical PanLex users to perform this kind of research using PanLex data.

PanLex is committed not just to making translations accessible to everyone, but also making linguistic data available to further the scientific advancement of humankind. We hope that our hard work can allow others to discover more and more about the languages we all speak, sign, read, and write.

Personally I like James Joyce’s word for cat sound: mraakneow – or something close to that.