In 2010, I traveled to Los Angeles to meet thought leaders and funders, and raise awareness about the issue of plastic pollution – which at the time was a largely unknown problem, and one almost completely absent from the societal discussion and the mainstream media. At a fundraiser event, I happened to meet filmmaker Michael Nash, who had just finished a documentary movie entitled Climate Refugees. We instantly found commonality in our seemingly quixotic quests: we were both passionate individuals trying to shine light on global issues with massive impact, that at the time were being largely ignored by the mainstream. I owe to this meeting, and to watching his still very relevant film, an early concern with one of the biggest humanitarian and security crises our world is facing today.

Nine years later, still not enough people know that climate change has been the main source of displaced people in our world for over a decade. In fact, since 2008, weather-related events triggered by climate change have displaced an average of 21.5 million people every year.

The tip of the iceberg

And this is just the beginning. One widely cited study, from Oxford-based professor Norman Myers, predicts that there will be 200 million climate migrants by 2050 – while other studies estimate that the actual figure may reach one billion.

Not surprisingly, the Pentagon and other military and security agencies of the world’s superpowers have taken notice, and are gearing up for what is likely to become the world’s biggest threat in terms of security and stability.

In sharp contrast, politicians and members of the general public don’t seem to show enough concern. The same, I believe, could be said of linguists.

My journey as a concerned language diversity champion

In 2015 I became an advisor to Aikuma, an organization with the mission to create a world that sustains its languages, and in 2017 I became a strategic advisor to PanLex, with a mission to overcome language barriers to human rights, information, and opportunities.

This work has deepened both my love of languages and my understanding of the importance of preserving language diversity. At the same time, it has led me to believe that the systemic intersections of language diversity and climate change may actually shape the fate of most of our world’s languages.

In order to fully understand our global climate refugee crisis, there are a number of key points that deserve consideration:

From wicked to wickedest

These interrelated aspects combine to make climate migration a wicked and systemic problem. To understand the implications for linguistic diversity, here are some points that set the stage:

Rising to the challenge

Could there be any silver lining for language communities among such an overwhelming set of bad news?

On the positive side, translation technologies have been experiencing a revolution, and their power and accuracy are growing exponentially. This gives us new hope that we might be able to help under-served language communities narrow the preparedness gap, gain equal access to emergency services and other basic needs; and become more resilient to the lasting impacts of displacement.

If we do this right, and rise to these challenges with determination, our response might actually drive us closer to a future where panlingual technology will help humanity overcome language barriers to human rights, information, and opportunities, while preserving linguistic diversity, and cultural richness. This is precisely the ultimate goal of the work we do at PanLex.

To fulfill this hope, however, we must act quickly and with resolution. First, by educating ourselves and fellow language lovers about the threat that climate change poses to linguistic diversity. Second, by building community among linguists, technologists, humanitarians and other stakeholders. And third, by injecting more resources into making powerful language tools available to those in need as fast as possible.

At PanLex we hope to use our database to build apps and other resources that specifically address panlingual translation of key terminology related to climate resilience, disaster preparedness and relief, and refugee and humanitarian crisis management. In order to achieve this goal we are looking for partnerships with international organizations, NGOs, and government agencies.

At the same time we are also pushing for making machine translation a reality in more languages, with an initial focus on mid-tail languages – a process that also requires abundant resources and the collaboration of many. On our end, we are proud to offer the PanLex Database, the largest of its kind, connecting 25 million words in over 5,700 languages – as well as our expertise and hard work. 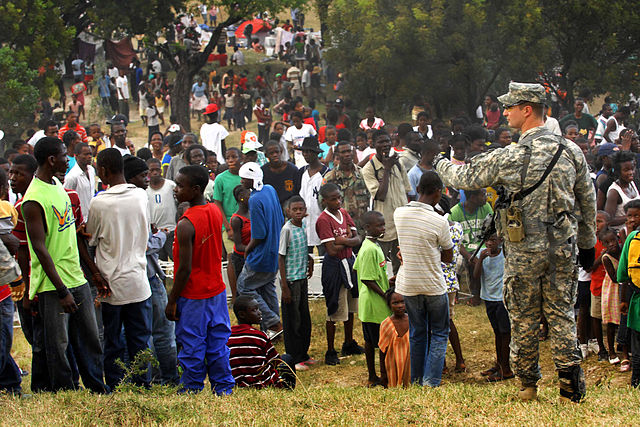 A crowd gathers at a country club that U.S. soldiers are using as a forward operating base in Port-au-Prince, Haiti, 2010. (Image by the U.S. Army.)

There is a meme that explains, incorrectly, that the Chinese word for crisis (危机, wēijī) is made of the combination of two characters meaning danger and opportunity. A meme so beautiful and so handy that it has found its way into presidential campaign addresses and a Nobel prize acceptance speech, and has become a cliché in classrooms, boardrooms, and pep talks.

Although this meme is a myth, many languages, Chinese included, have expressions that speak of the wisdom of using a time of crisis as an opportunity for deep change. The important difference here is that, in reality, danger does not automatically yield benefits. It is through wise, inspired, and relentless action that we can transform a crisis into an opportunity of equal magnitude. May it be so.