In 2011, the Internet Archive photographed nearly the entire collection of Balinese palm-leaf manuscripts (130,000 leaves in all) as part of an effort to bring out of the shadows the lesser-known literatures of the world and to inspire others to do the same.

These traditional Balinese texts were inscribed with a special triangular iron stylus on treated Lontar palm leaves that come from the Borassus fabellifer family of palms. Subjects span a variety of aspects of life, including religious ceremonies, guidelines, and magic; medical, astrological, and astronomical knowledge; epic stories, histories, and genealogies; and the performing arts and illustrations. Many of the texts are centuries old and have been re-copied many times over the years, as the leaves themselves break down over time. 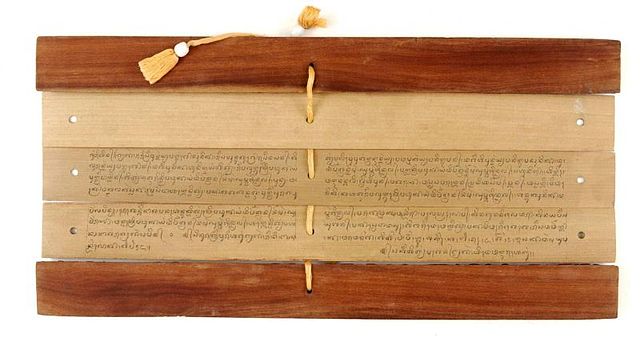 PanLex is excited to be managing the next phase of the Internet Archive’s Balinese Digital Library. We will coordinate with staff at Udayana University in Denpasar, Bali, to have the palm-leaf images manually transcribed into Unicode text in Balinese script, so that it will be readable and searchable by computer. This is an ambitious project with interesting technical and logistical challenges. Good Balinese fonts have only recently become available, and Balinese keyboards are still not widely supported. We have created a web app specifically for the transcription of Balinese manuscripts, including an integrated keyboard for the Balinese script in which these manuscripts are written. We will be testing our app and workflow over the next few weeks.

Transcribing the palm-leaf images into Unicode text will enable additional steps to make Balinese literature more accessible and available to the Balinese community and the world, including transliteration of Balinese text into Latin script and translation of these works into Indonesian and English.

[…] The lontar are now being manually transcribed into Unicode text in Balinese script with the help of PanLex, so that it will be readable and searchable by […]